SHANGHAI, Sept. 2, 2022 /PRNewswire/ — Shanghai Electric announced that Phase B of the 900-MW fifth phase of the Mohammed bin Rashid Al Maktoum Solar Park has entered operation. As part of the world’s largest photovoltaic (PV) plant under construction, the project will aid Dubai’s push to upgrade and transform its energy mix by providing 2.268 billion kWh of power supply per year upon completion, enough to serve up over 240,000 homes and capable of reducing 1.1 million tonnes of carbon emission annually. 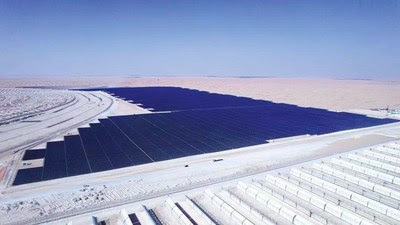 “We are so proud to see the solar park hit another historical milestone after Phase A was connected to the grid in 2021. Now, work on Phase C is well underway and is expected to complete in 2023, ” said Meng Chuanmin, Project Manager of the Mohammed bin Rashid Al Maktoum Solar Park Phase V.

“The construction process of the fifth phase of MBR Solar Park is marked by a series of challenges, culminating in the peak of the COVID-19 pandemic that severely disrupted global supply chains. The team overcame the difficulties and ensured the procurement and delivery of the raw materials for the project were timely implemented to avoid any delay to the overall progress,” Meng added.

Shanghai Electric has also made great efforts to control the costs. Compared to the pre-pandemic period, container shipment has become widely unavailable, with transportation prices for cables having generally increased by a factor of ten. To ensure the project can be completed on schedule, the team decided to ship cables via bulk carriers, despite the new solution driving up the workload.

In addition, due to the natural movement and fluidity of sand dunes, the team later discovered that the construction site was elevated by hundreds of thousands of cubic meters compared to the previously surveyed value, translating to an addition of $3 million to the overall cost. After a thorough investigation and research, Shanghai Electric came up with a plan that helped the team solve the issue while guaranteeing no interruption was caused to the construction progress.

Acwa Power, owner, developer and operator of the fifth phase of the Mohammed bin Rashid Solar Park, appointed Shanghai Electric as the engineering, procurement and construction (EPC) contractor for the project in 2020. Starting in July 2020, the project consisted of Phrase A, B and C, with a total installed capacity of 1050 MW.

With the international team of the project employing over 2,500 workers during the peak period, Shanghai Electric’s effort to unite the best global workforces, resources and supplies to build one of the most advanced solar complexes in the country has been recognized by the project owner and its partners. In addition, the project also created over 4,000 direct and 10,000 indirect work opportunities, playing a key role in promoting local employment and economic development.

Shanghai Electric has also participated in the construction of the 950MW fourth phase of the Mohammed bin Rashid Al Maktoum Solar Park, which includes a 700MW concentrated solar power (CSP) plant and a 250MW photovoltaic (PV) plant. The CSP is able to store the thermal energy during the daytime, which can later be used for electricity generation at night, offering a clean, stable and reliable energy supply around the clock.

Since it commenced in 2018, the project has hired over 8,500 workers during the peak period, with the 100 MW CSP tower plant and the 200MW parabolic trough plant-II scheduled to be connected to the grid at the end of 2022. It features the world’s most advanced solar technologies that will provide clean energy for around 320,000 households and abate 1.6 million tonnes of carbon emissions every year, going a long way to helping Dubai achieve its 2050 renewable vision.