LOS ANGELES, April 29, 2022 /PRNewswire/ — Netmarble announced the second closed beta test (CBT) for Overprime, its upcoming strategic action 3D TPS MOBA for Steam, is now available. While the second CBT will run until May 9 at 6AM ET/3 AM PT, everyone can be part of this test via Steam platform. 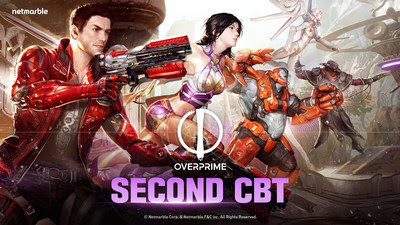 Players from around the globe will have 11 days to battle it out on 7 server regions: Seoul, Frankfurt, Virginia, Singapore, San Paulo, Hong Kong, and Bahrain. The CBT will offer 25 Steam supported languages along with Arabian, Indonesian and Hindi.

Prior to the launch of Overprime‘s second CBT, Netmarble has recruited a number of Partner Creators globally including Korea, Japan and the U.S to bolster the CBT experience and showcase the game with their viewers.

To celebrate the momentum, a number of events are drawing fans’ attention.

While the events are only available during the CBT period, the detailed information can be found in Discord Channel and Steam.

Established in Korea in 2000, Netmarble Corporation is a top developer and publisher pushing the boundaries of the mobile gaming experience with highly innovative games including Marvel Future Revolution, Ni no Kuni: Cross Worlds, Lineage 2: Revolution, The Seven Deadly Sins: Grand Cross, Blade & Soul Revolution and Marvel Future Fight. As a parent company of Kabam, and a major shareholder of Jam City and HYBE (formerly Big Hit Entertainment), Netmarble strives to entertain audiences around the world with a variety of mobile games based on its powerful franchises and collaborations with IP holders worldwide. More information can be found at http://company.netmarble.com