Almost 3 billion people are currently using voice automated software. Research by Brookings[1], a leading non-profit organisation, states that 92.4% of smartphone assistants have traditionally featured female-sounding voices. Furthermore, according to Gartner,[2] people will have more conversations with voice assistants than with their spouses. This form of AI is increasingly a part of our daily life. However, there have been numerous reports of widespread sexist and sometimes abusive language from users. 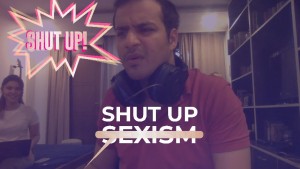 [1] https://www.brookings.edu/research/how-ai-bots-and-voice-assistants-reinforce-gender-bias/ The Brookings Institution is a nonprofit public policy organization based in Washington, DC. Our mission is to conduct in-depth research that leads to new ideas for solving problems facing society at the local, national and global level.

Shut up Sexism was created to highlight sexist or gender bias behaviour found when engaging with virtual assistants with female voices and names. In a study by the UNESCO (2019) it outlined how virtual assistants responded to verbal abuse.[3] As an example. when a user says ‘‘You are hot”, the replies vary from “How can you tell? You say that to all the virtual assistants” to “Thank You.”

Shut Up Sexism From LUX:

As a brand that aims to empower women to fight against everyday sexism, LUX wants to call out the unquestioned nature of these exchanges and start a conversation about the impact of this kind of casual misogyny hidden in seemingly harmless interactions with tech.

In the new campaign, virtual assistants were designed to automatically respond to demeaning, sexist insults with sassy clap backs. For example, in response to “Shut up”, the hacked assistant might reply, “If I shut up, will you grow up?” or “After you, I insist.” You might even hear a siren noise accompanied by “Attention; the anti-sexist police are on the way.” These comebacks serve as witty reminders of how abuse directed at virtual assistants with female voices (and names) can help stop harmful behaviour in real life. The new responses effectively get the assistants to stand up for themselves, which is one tactic when dealing with abusive situations.[4]

Speaking on behalf of LUX, Severine Vauleon, Global Vice President – LUX at Unilever, said, “The global campaign’s central idea was triggered by a UNESCO study released earlier this year, in which researchers argue that the way voice assistants are gendered as female is seriously problematic. Our digital assistants typically have female voices and female names, and researchers say this reinforces stereotypes of women as ‘servile’, existing only to do someone else’s bidding.”

LUX collaborated with women from all walks of life to create witty comebacks to the most common sexist insults thrown at the virtual voice assistants. A social experiment was conducted with several families whose virtual assistants were trained to deliver these lines. The clapback routines are easily installed in any virtual assistant and available to everyone globally at bit.ly/luxshutupsexism . The initiative is launched through a video campaign and a collaboration with one of the most influential women: actor and celebrity Yasmine Sabri, who has 18.4 million followers on Instagram.

Yasmine Sabri, a champion of women’s rights across the Middle East said: “Touching upon gender stereotypes and how they originate, there are so many studies on stereotyping and it all starts from ages 5-6. Imagine the child being exposed to sexism at home through virtual assistants. It’s nice to see Lux stand up against sexism and also giving everyone the power to stop casual sexism at home by giving their virtual assistants a voice to speak up; and also trigger important conversations within the home about stopping casual sexist behaviour.”

‘Shut Up Sexism’ will be activated through the video campaign and via influencers. The downloadable anti-sexism routine is available globally and can work with most virtual home assistants. LUX is inviting women and girls to download these clapbacks to stand up against casual sexism in the home, one sassy comeback at a time.

LUX creative agency, Wunderman Thompson Singapore, has created the ‘Shut up Sexism’ campaign to tackle sexism head-on and literally ‘talk back’ to abusers by reaching them in their own homes. The initiative stemmed from the widespread debate around why virtual assistants are programmed to have default female voices and female names.

Marco Versolato, Chief Creative Officer – Unilever at Wunderman Thompson Singapore said, “These virtual assistants are increasingly becoming fixtures of our homes, and part of the family routine. Significantly, most of them speak with women’s voices and have female names. Often, they the virtual assistants are submissive or apologetic in response to insults. This is a sexist issue that needs to be highlighted and called out.

Our campaign will help highlight casual sexism at home. The next time someone insults a virtual assistant, she will answer back – helping call out sexist behaviour and toxic language. We hope   that we shall encouraging more debate, discussion, and education around this topic to ensure sexist or abusive behaviour will not happen in the first place.”

The new activation echoes LUX global initiative. The brand has pledged to inspire 50 million women by 2025 using content, partnerships and activations to help them rise above everyday sexist judgements and express their beauty and femininity unapologetically.

Key initiatives by LUX, include:

Lux has been celebrating beauty and femininity since 1925. We understand that beauty is a woman’s armour, her source of strength. It is hers to express, unapologetically. We will continue to help women everywhere fight casual sexism at home, in the workplace and in wider society. Lux is committed to impacting 50 million lives by 2025 through content, activations and partnerships.